What is the best console for Backward Compatibility, and which ones should you be focusing on with this feature in mind? Why does it matter to begin with? Let’s dive right in!

What is Backward Compatibility?

First, a quick brief for anyone not in the loop: “backward compatibility” refers to the ability of a games console to play games from its previous console generation. As a classic example, the PlayStation 2 was known for being able to play DVDs, CDs, and even PlayStation 1 games, not just PS2 games. This used to be one of the premiere features of any new gaming console, since backward compatibility allows you to carry over your games library across generations without having to keep old hardware.

In recent years, though, the feature is seeing different levels of implementation and even different *forms* of implementation. Let’s get into backward compatibility for each current console, the variations and supported systems therein, and crown a winner from there. 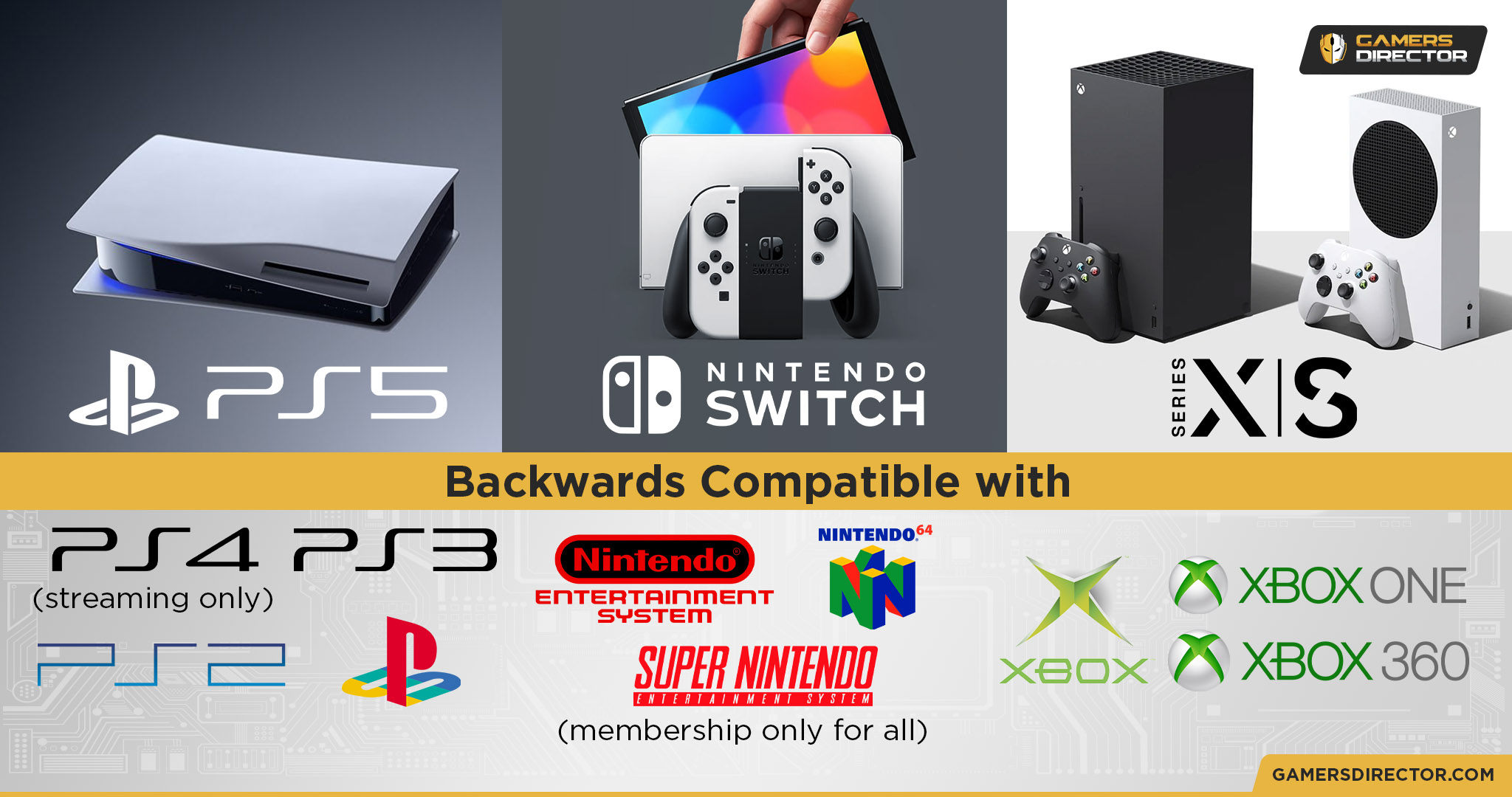 How is Backward Compatibility on PlayStation 5?

On the note of PlayStation 4 Backward Compatibility, the feature goes beyond playing old games on PlayStation 5. Games made for PS4 that received PS4 Pro patches will automatically run those versions of the game on PS5, and many PS4 copies of a game still receive free PS5 update patches. Overall, this means that the best PS4 games are all better on PlayStation 5.

Not a bad showing from Sony, so far. Now, though, we have to talk about Everything Else.

Everything Else- that is, PlayStation 1 through PlayStation 3- have varying levels of support that will depend on the version of PlayStation Plus that you’re paying for, or what past games you already have on your PS account.

On the PS Store, there are a limited selection of PlayStation 1, PlayStation 2, and PlayStation Portable games available for purchase and play on PS5. Additionally, PlayStation 3 games are also playable, but only through streaming via PlayStation Now, since a native PS3 emulator doesn’t seem to be Sony’s priority right now.

If you’re accessing the games with a PlayStation Plus plan, you’ll need to get a Premium Plan to have full access to Sony’s Classics Catalog.

Overall, if I had to assess the backward compatibility for PlayStation 5, I’d say it’s great for PlayStation 4 games…but pretty questionable for the rest of the catalog. Being able to buy and download certain PS1, PS2, and PSP games is good, but you should be able to do so with all of them, and the PlayStation 5 is more than powerful enough for PS3 emulation too.

How is Backward Compatibility on Nintendo Switch?

So, how does Backward Compatibility stack up on Nintendo Switch?

Not very well, to be frank, especially not if you owned the Nintendo Wii U. Wii U games are not compatible with the Switch, and in fact are regularly re-released at full price or close to full price on the Switch- albeit with some improvements, but still. Past the Switch’s inability to play Wii and Wii U games (despite the hardware clearly being capable of doing so), a limited form of Nintendo’s back catalog is available on the console…but it’s all based on memberships.

Specifically, you’ll need to pay for Nintendo Online to have access to a back catalog of NES and SNES games, with N64 games being available for an extra “Expansion Pack” fee. Compared to far more modern backward compatibility options available on other platforms, this is an egregious way to monetize old games, especially when not even offering full downloads like the Wii and Wii U did.

Nintendo has the worst backward compatibility for this generation, in my opinion.

How is Backward Compatibility on Xbox Series S and X?

Is the backward compatibility on the latest Xbox Series S and Series X consoles worthwhile? Let’s talk about it!

The short answer is: yes, very much so. In fact, Xbox has been doing a pretty great job with backward compatibility since the Xbox One era, pushing for certain Xbox 360 and original Xbox games to be playable on new hardware. Depending on the game and the Xbox console in question, these backward compatibility implementations can also feature other enhancements.

As of the Xbox Series S and X, the Xbox and Xbox 360 backward compatibility library has only expanded. Certain 360 games are now getting “FPS Boost” patches on Xbox Series hardware, including Sonic Unleashed now able to run at a stable 60 FPS without the severe dips it had on the original 360.

The Series S and X also support Xbox One and Xbox One X games in the same way that PlayStation 5 does, making their backward compatibility better across-the-board, not just feature-equivalent. The Xbox Series consoles are putting on quite the show!

With that in mind, it’s time to wrap things up.

The Best Console For Backward Compatibility Is…

The Xbox Series X, and not only for the reasons laid out above. Make no mistake: those reasons are pretty good. Being backward compatible all the way back to the original Xbox console, including FPS boosts and other enhancements already makes the Series X the best choice for backward compatibility today.

But there’s a secret weapon that the Series X (and the Series S, albeit to a slightly lesser extent) has that the other consoles don’t. Specifically, you can install UWP apps on an Xbox console without even needing to jailbreak, and this opens up the door to RetroArch and other emulators, which run great on the Xbox Series S and X! Even PS2 and Wii games work great!

When To Consider a PC or Steam Deck For Older Games

Before I wrap things up here, I would be remiss not to discuss PC gaming and the Steam Deck as an option for people who want to preserve their game library for years to come.

With a powerful enough gaming PC, you can effectively emulate nearly every modern gaming console. On Nintendo’s side, that’s everything up to the Switch, which is currently fully playable in many games. For Sony and Xbox, PC emulation is still working its way through the PS3 and Xbox 360 era, but turning around some really great experiences.

Steam Deck is also quite the emulation machine, though it will struggle with these newer consoles. Check out my EmuDeck Guide if you want to emulate on your Deck!

Outside of emulation, actual PC games also tend to have much better compatibility with future platforms and OS versions compared to console releases. You may have to do some extra configuration with some titles, but on Windows 7-11 you can pretty safely play games made for OSes going as far back as Windows 95. That’s pretty good!

If you want access to an even wider back catalog with capacity for mod support, personal backups, and enhancements, you should consider a PC or a Steam Deck for your backward compatibility needs. But if you’re committed to a console with this question in mind, definitely consider the Xbox Series S or Series X!