What are FSR and DLSS, and what impact can they have on your real-world gaming experience? I’m going to cover both of these topics in extensive detail in this article, including Nvidia’s Image Scaling FSR alternative and what sets it apart. Without further ado, let’s dive into it!

FSR and DLSS: A Quick History

So, let’s start with a quick history of how these two technologies made their debut. DLSS came first, launching as an exclusive feature along Nvidia’s RTX graphics cards. FSR released alongside RTX graphics cards in February 2019 while FSR first released in June 2021. Both products have seen plenty of iteration and improvements as time has gone on, too- but more on those later.

Let’s dive into those differences and delicious, savory nitpicks.

DLSS is short for Deep Learning Super Sampling, and the secret to how it works and performs is pretty much in the name. Deep Learning is a term used in AI to describe an AI’s ability to learn from existing data to either extrapolate missing data or create new data. It’s meant to imitate the way a human might put together these details, at least in theory- something being named deep learning doesn’t mean it uses it, or uses it well.

With Deep Learning Super Sampling, a GPU’s Tensor cores analyze 3D games running at a lower resolution (like 720p) before upsampling it to a higher resolution (like 4K). Different levels of DLSS use different scale resolutions, but add AI enhancements on top of the low resolution content to produce a surprisingly convincing image. But since a much lower source resolution is used, the performance improvement is pretty significant- usually.

With settings like DLSS Quality, which renders at higher resolutions, DLSS 2.0 can even be used to achieve a “better-than-native” image, at least according to Digital Foundry. This is thanks to the AI enhancements, which can extrapolate on details in an image in a way that raw pixels can’t. This makes things like fairly small text on in-game objects (think a small poster with high detail) harder to see without upping resolution or moving the camera, but DLSS Quality can reproduce fine details like that better in most situations.

That being said, you noticed how I slipped a mention of DLSS 2.0 in there? DLSS has full revisions, and unfortunately games need to be updated in order to properly support those revisions. And it’s really not until DLSS 2.0 where DLSS becomes more compelling for image quality, though the debut version still had fairly decent performance gains.

Not only did DLSS start with somewhat blurry, subpar image quality that requires manual updating to fix, but it needs manual updating to be supported in general. So even though DLSS turns around some pretty great-looking results at a high framerate these days, it still needs actual support from the developers to be used at all.

So, how does FSR work? Why did it launch as competition to DLSS, and how is it being used today?

FSR launched in a somewhat similar state to DLSS in that it needed manual patching to be used. Unlike DLSS, however, FSR is not hardware-accelerated by specialized non-GPU cores- instead, the upscaling is done by the GPU using AMD’s own spatial upscaling algorithm. It’s more of a software fix to low res/performance than a hardware fix.

Also unlike DLSS, FSR is also open source. This makes FSR usable on any graphics card, not just AMD, which even made it popular among many Nvidia GPU users until Nvidia released their own alternative. FSR has also been updated to be supported on the driver-level over time through RSR (Radeon Super Resolution), no longer necessitating that games be updated specifically to support it.

However, FSR is not without its downsides. Since it’s using software rather than hardware, the results that it can achieve are limited and thus far no “better-than-native” results are possible.

Additionally, if you force FSR through RSR in an unsupported game (or through other methods, like FSR in Steam OS), there’s a small problem. Basically, the entire game, including HUD elements, will always be run through the upscaling and filtering, which doesn’t always look good.

With implementations of FSR properly coded into the game, FSR can be done for just the 3D rendering parts of the game, not its static HUD elements. This provides all the intended benefits of FSR without messing with HUD elements. FSR and RSR function the same otherwise, though.

So, let’s start with what DLSS looks like today. Here’s a good video example to start!

A benchmark run of Doom Eternal with ray-tracing enabled at various native resolutions, then DLSS resolutions.

To my own eye, DLSS 2.0 in Quality mode as implemented in Doom Eternal looks just as good as a native image, and the benchmark numbers from this and other sources don’t lie: the performance benefit is real, and significant.

Running at native 4K on an RTX 3070, the benchmarker had averages dip as low as the 30 FPS range under heavy load. In the same intensive scenario, DLSS Quality never dipped below the roughly 70-80 FPS range.

The averages were much higher across-the-board in DLSS as well, often boosting average framerate by up to around 30-40% in most scenarios…which makes sense, because DLSS Quality is actually operating off of roughly 66% of the final resolution. (This is compared to the lowest DLSS setting, DLSS Performance, which operates off of only 50% resolution.)

The general consensus around FSR is that it’s a fairly good solution for upscaling from a lower resolution, and the fact that it’s supported by pretty much any GPU, not just AMD’s, also does it plenty of favors. However, its limitations of being non hardware-accelerated and ultimately working with lower resolution images means that certain super-fine details (stuff that’s in the range of 1-2 pixels wide, for instance) may not be reproduced properly with FSR, because it can only upscale what’s actually visible at the base resolution.

In my own testing, FSR has served me surprisingly well in terms of performance with minor loss in visual quality. I would need to do more testing to confirm how it compares to in-game resolution scaling options, but especially for games that don’t support that feature or don’t support it well, FSR is a godsend for performance.

On the smaller screen of my Steam Deck, FSR is also particularly good- honestly unnoticeable to my eyes, upscaling from 540p to 720p. It saves lots of power and performance on the humble 15W Steam Deck, but enough to enable a smooth 30 FPS in Elden Ring. For a purely software solution, FSR can turn around some surprisingly good results.

I’ve actually been able to test this one on my own home PC, as I use a GTX 1070. I recently tested Doom Eternal with my own balanced settings at 1440p with a 74% static in-gameresolution scale. It performs solidly enough on my PC- about 80 FPS most of the time- but can look slightly blurry in some places due to the low source resolution. The original pixel count is roughly in line with 1080p. 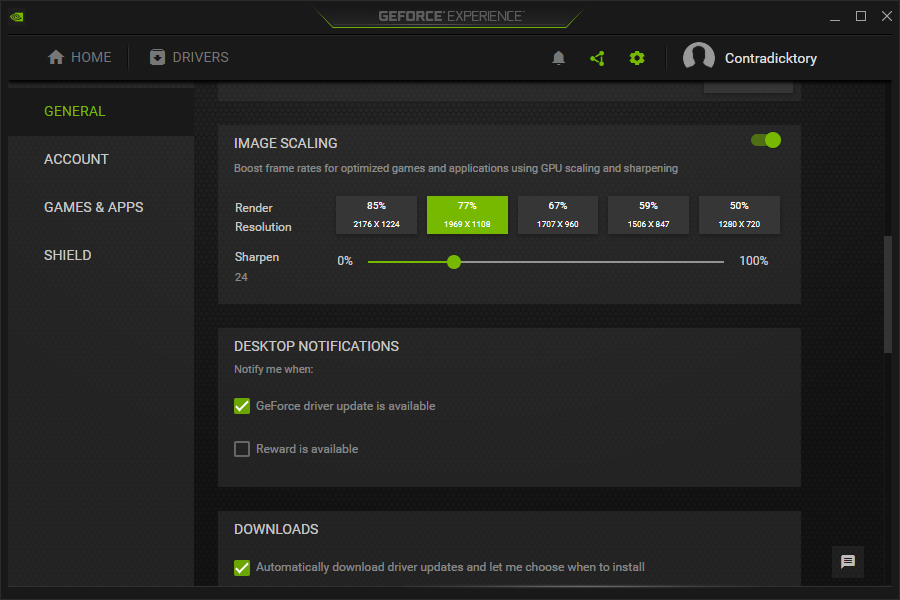 Changing the resolution to 1969 x 1108 (or 77% resolution), disabling in-game resolution scaling, and allowing Nvidia Image Scaling to do the rest ended up producing a much cleaner and sharper image than I was getting from ingame resolution scaling by itself. I also gained about 25-30 FPS on average, boosting my averages from about 80 FPS to consistently over 100.

Truthfully, this result surprised me– I somewhat assumed that the in-game resolution scaling solution would simply be better, as it’s in-engine and not being forced for the entire game. But the results spoke for themselves, and I’ll actually be sticking with this combination of settings for my future plays of Doom Eternal and other games where I need some extra GPU horsepower.

How much will FSR or Nvidia Image Scaling improve my experience on a cheap or low-power PC?

I would say significantly. There are definitely downsides, though. With both of these non hardware-accelerated technologies, you’ll need to specify and tweak things like sharpness alongside the upscaler, as a too-high setting risks adding awful aliasing to the image. I recommend FSR Sharpening at 2 and Nvidia Image Scaling at 24% as starting points.

So far, I’m fairly happy with Nvidia Image Scaling and FSR. DLSS may be able to provide a better image in a narrow selection of supported games, but it’s clear that FSR and NIS serve an important purpose for aging and low-power GPUs needing extra performance or resolution.

Are budget RTX GPUs worth it for DLSS support?

If by “budget” you mean the abhorrent RTX 3050, no. While the card can turn around good performance when backed by DLSS, it simply is not competitive as a good graphics card without it, and is also bottlenecked hard by its PCIe x4 interface on older motherboards.

If you mean last-gen RTX cards or other lower-priced RTX cards, then yeah, but with a caveat.

If you’re buying a graphics card with DLSS in mind, you’ll want to double-check that the games you want to play actually support the feature. More importantly, you’ll want to make sure they support DLSS 2.0 or another up-to-date version of DLSS, as launch DLSS is arguably worse than the pure software-based upscalers (FSR and NIS) currently available from both companies.

If enough games you play support DLSS for you to choose an RTX graphics card over a slightly stronger competing AMD or Intel graphics card, that’s totally fine. Otherwise, though, your money is better spent elsewhere.

How does the Steam Deck use FSR?

Valve’s notorious Steam Deck handheld has hardware power akin to that of a PS4 but is still capable of playing modern games at comparable or better settings and framerates in a handheld form factor. So, what’s the secret?

Well, there are a few different secrets. The big one is that the Steam Deck only runs at 720p to 800p, so there’s no worry of trying to meet high-resolution targets on the handheld. Another is that the console-styled hardware allows Valve to pre-compile shaders and make specific compatibility tweaks for the hardware.

This makes it possible for Steam Deck to stabilize Elden Ring at 30 FPS without any severe dips, whereas both the console and Windows versions of the game still suffer from performance drops whenever new assets are loaded, resulting in many an unfair death.

But that isn’t the only performance trick that the Deck has in its pocket! Since the Deck’s Steam OS is based on Linux, it can actually force an OS-level version of FidelityFX Super Resolution that works with nearly any game on Steam. Like other driver-level implementations of scaling tech, this does add some blurriness to upscaled UI elements, but on a handheld screen the difference is nearly invisible.

If you’re using FSR on a Steam Deck, you’ll be operating with a resolution of 540p. That doesn’t sound like much, but when put through FSR on a relatively compact and sharp handheld screen, it holds up extremely well. I used it to push a mid-40s average in Elden Ring and help maximize my 3D performance in other games, as well. To my eye, it looks pretty much perfect.

I hope that this one helped you learn and understand a little more about the rising high-end upscaling technologies being released by both AMD and Nvidia. In my eyes, these are an uncategorically good thing for gamers everywhere, and seem to only be improving over time.

Leave a comment below and let me know, though: what do you think? Are you going to be using FSR, NIS, or DLSS anytime soon?

Mouse Pad For Gaming - Do You Really Need One?