So, you’re hoping to get in some quality PC gaming with your control method of choice and finding that your controller simply is not being detected by your PC. Or maybe you have a similar but closely-related issue, like your controller having issues in specific games or contexts only.

Whatever the case is, I’m looking to cover the causes in this article, and by the end of it you should have a solid idea on how to fix whatever controller compatibility issues you’re having with your gaming PC. Let’s dive into it!

So, controller PC compatibility is actually pretty good…with several asterisks. Outside of Microsoft Xbox controllers and other xinput controllers, most controllers are not plug-and-play with a Windows PC right away. Controllers from both other major console manufacturers (Nintendo and Sony) will still require some extra configuration when compared to an Xbox controller with OS-level support.

So, let’s dive into the common reasons that your controller might not be detected by your PC, and what you can do to fix it.

Controller Not Detected By PC In Non-Steam Game: Usual Cause and Fix

The reason why I put this one first is because it’s the most likely to be an issue for the most people. As great as Steam can be, it has this funny tendency to intercept your controller inputs from other applications, especially if you already use that controller for Steam games. Sometimes, this results in your inputs not being detected by your game.

Fortunately, you can usually fix this by just exiting Steam when you’re in a non-Steam game, or even launch your game/application through Steam. Steam Input isn’t guaranteed to work with non-Steam games, though, so be careful.

If you want to try to fix this without just exiting Steam, also consider disabling Controller Desktop Configuration in your Steam Settings. 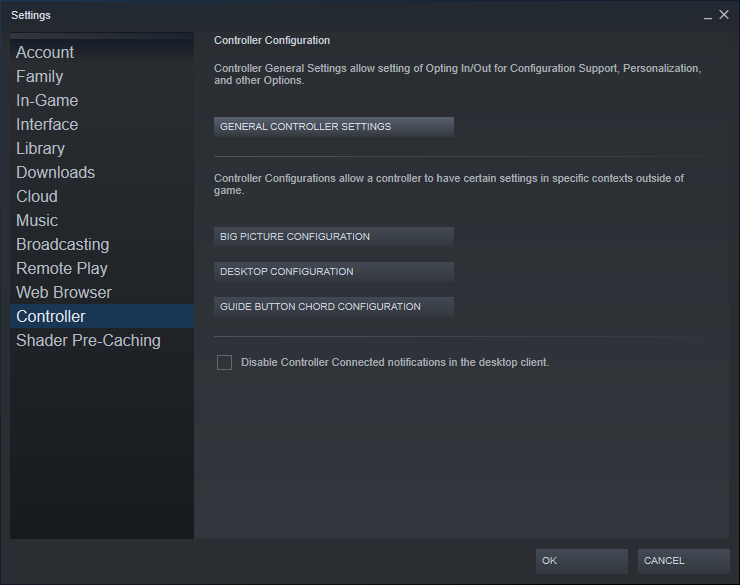 I encounter this issue most often in emulators and when playing games from other storefronts, like the Epic Games Launcher or Ubisoft’s UPlay. Quickly turning off Steam is my go-to for fixing the issue.

Controller Not Detected By PC In Steam Game: Usual Cause and Fix

If your controller detection issue is within a Steam game, the fix is usually pretty straightforward. Head to your Steam Settings Menu, then the Controller Sub-Menu, and click “General Controller Settings”. 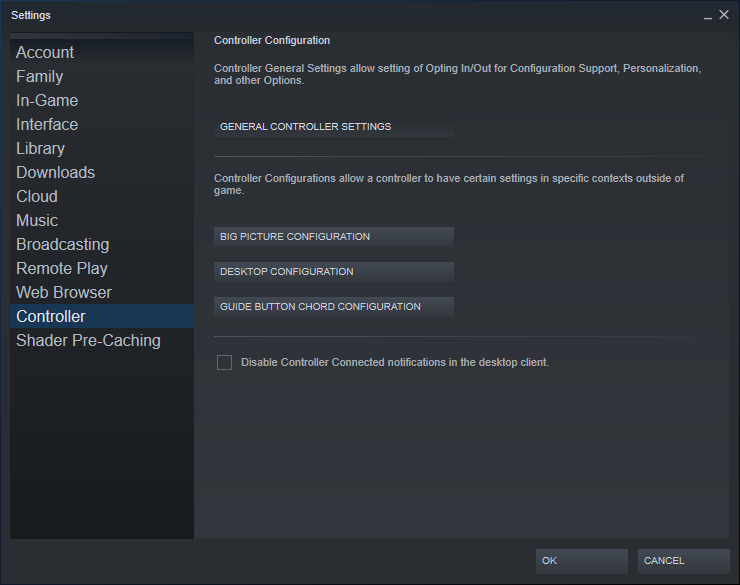 A small Steam Big Picture window will open, and inside it you’ll be able to enable options like “PlayStation Configuration Support”. 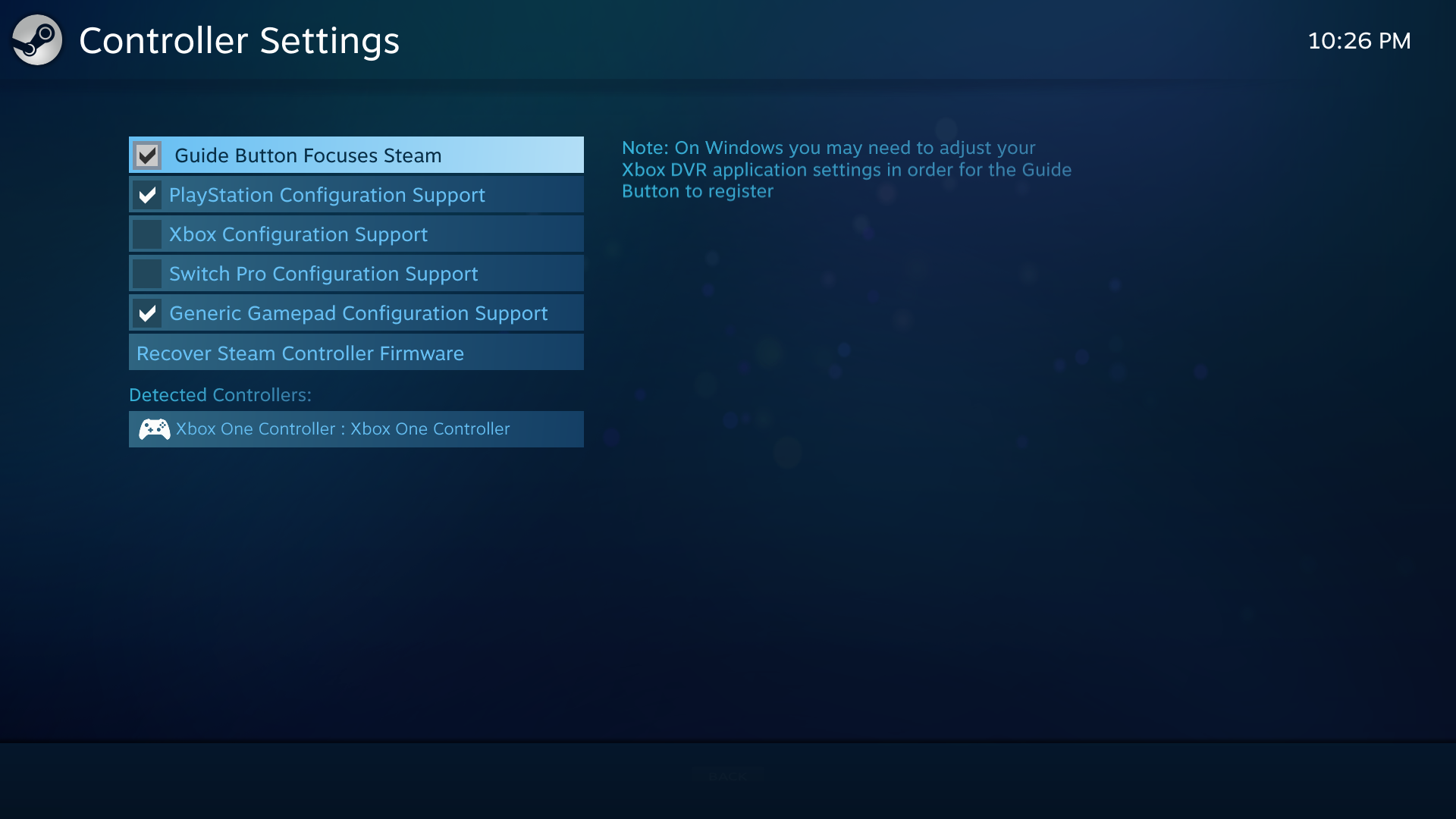 Example screenshot from my own Steam installation. I have PlayStation Configuration Support enabled for my PlayStation-playing friends, but otherwise keep my Xbox Elite Controller untouched by Steam Input unless I specifically need it for something.

Enabling these options will allow Steam to completely take over that controller’s inputs while Steam is active and the controller is connected to the system, but it does save the end-user lots of trouble when it comes to hunting down controller drivers and etc- at least for Steam games.

Wireless Controller Not Detected By PC: Usual Cause and Fix

If your wireless controller isn’t being detected by your PC and you’re sure that your PC supports Bluetooth, you should be able to fix the problem with any reasonably modern wireless controller. You just need to dive into Windows’ Bluetooth & other devices Settings, which you can pull up by searching “Bluetooth” in the Start Menu fairly quickly. 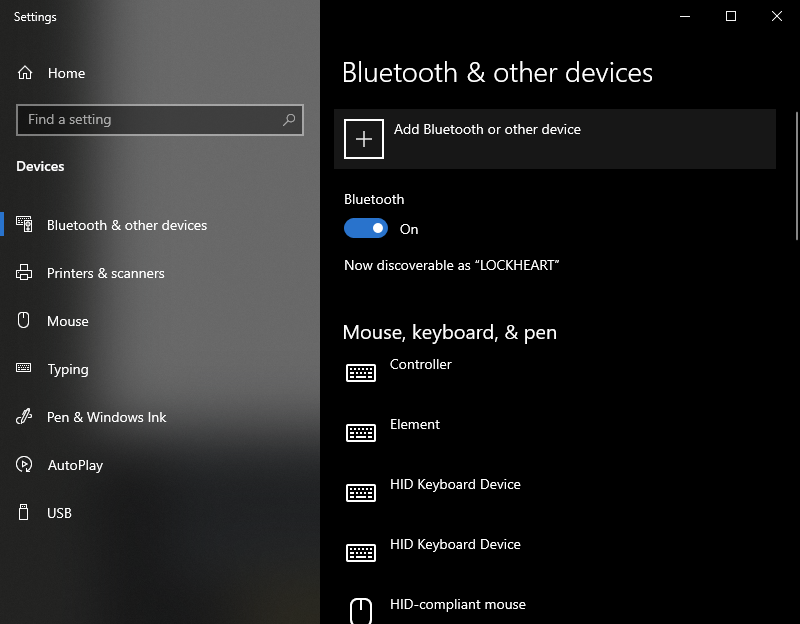 Once you’ve done that, click “Add Bluetooth or other device” and then select “Bluetooth” unless you’re using a USB Wireless Xbox Adapter.

For Xbox, the main exception is actually found in the Wireless Xbox 360 Controller, which doesn’t actually use Bluetooth as its wireless technology and so does not connect to a PC without a USB adapter.

Xbox Wireless controllers from the release of the Xbox One and onward should have out-of-box compatibility with any modern Windows PC, but you may need to find your PC’s Bluetooth devices menu and reset/sync your controller.

For PlayStation 4 and PlayStation 5 controllers, a wireless connection should be achievable with a simple Bluetooth pairing. Past that, you’ll need to rely on Steam Input or an alternative solution to actually use your PS Controller in your PC games- more on that in the next section.

If your wireless controller isn’t being detected by your PC but has been detected before, you may need to remove it from your list of remembered Bluetooth devices. Even if it says “Paired” in Windows, I’ve found both PlayStation and Xbox controllers sometimes not connecting when being powered on. Un-pairing and re-pairing them fixes the issue. 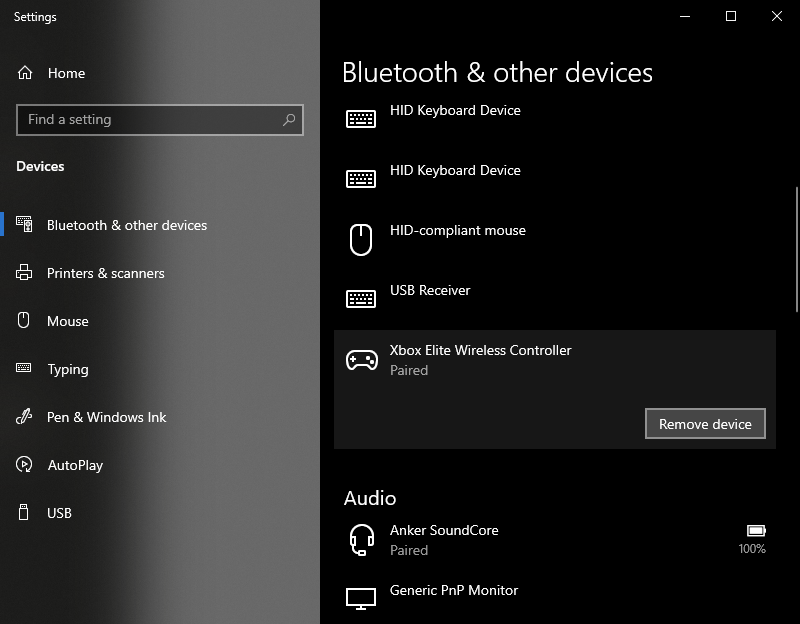 Controller Not Detected By PC At All: Usual Cause and Fix

Finally, what do you do if your controller simply isn’t being detected by your PC at all? Alternatively, maybe you want to use a controller in non-Steam games, and turning off Steam also disables the controller?

For compatibility and ease of use with most titles, especially PC titles, a simple XInput wrapper for your controller of choice should do the trick. If there aren’t any specific functions you’re trying to keep (like pressure-sensitive face buttons on PS2), there’s no real downside to a simple program that makes your PC treat your controller like an Xbox controller.

For deeper customization and especially emulators with hardware-specific features like motion controls or pressure sensitivity, you’ll want a full custom driver. These will vary depending on your controller, but I can include some quick recommendations to get you started below:

What other problems can be addressed through these fixes?

General connectivity issues and other problems that might come as a result of conflicting controller drivers. As an example, I used to notice that pressing my L3 button on my Xbox Controller while in a UPlay game would open up Steam’s desktop mode keyboard in the background, causing in-game lag and input issues.

Cleaning up your input management on Windows tends to be a good thing.

Is there a meaningful difference between Steam Input and more custom controller drivers?

Yes. Steam Input is fairly good about supporting multiple controllers, even their unique features. However, its use outside of Steam is fairly limited and inconsistent. This is why custom drivers are necessary in some situations to fill in the gaps left by Steam Input, like proper button sensitivity in PlayStation 2 or PlayStation 3 emulation.

Can controllers be used alongside keyboard and mouse without disconnecting?

This depends on the game, but generally-speaking the answer should be yes. You may notice some inconsistency in the HUD whenever you’re doing this (ie switching between keyboard and controller prompts), but as long as you don’t encounter any actual issues you should be fine to use a hybrid control scheme.

Alternatively, you may be using something like Steam Input or DS4 Windows to turn your motion or touch inputs into added mouse inputs. This is the same situation as far as the game you’re playing is concerned, so be wary of games that don’t support seamless switching between input methods if you want to do something like this.

What controllers should give me the best experience on a Windows PC today?

You’ll generally be best-off with an Xbox Core Controller, as it’s the latest official Xbox controller and should be plug-and-play with virtually anything on your PC. If you prefer a different layout, a PlayStation 5 controller can be a great pick too, but you may need to use something like DS4Windows in order to use it in non-Steam games.

I generally only recommend Nintendo controllers if you already have them with their consoles or are intending to emulate their respecitve consoles, as few, if any PC games properly support them.

I hope that this article helped teach you a few things about controller compatibility with your PC. While I didn’t quite cover the full scope of it, you should have more than enough information starting from this article to make sure that your controller of choice, even an obscure one, is working properly with your system.

But leave a comment below and let me know: what controller are you trying to get working with your PC, and how can I help? Alternatively: what special input configurations are you getting set up with your machine?

What are FSR and DLSS? High-End upscaling Technologies explained