Ever wondered how to use back buttons on a controller, how to configure them in your games, or just want some good ideas to start with? This is the article for you.

What are Controller Back Buttons?

Controller back buttons, also known as controller back paddles, are basically extra buttons on top of a standard gamepad layout. Depending on the exact brand and implementation, you may see anywhere from 2 to 4 back buttons.

What Major Controllers Support This Feature?

Since they are “extra” buttons and modern games are designed with only a certain number of gamepad inputs in mind, these buttons are usually used as secondary versions of other buttons already on your controller. For example, if you need to press or hold two face buttons simultaneously but they’re too far apart, using a back button for one of those buttons frees up your thumb to only need to cover one face button.

Basically, controller back buttons serve as both a comfort feature and a manner of enabling more independent actions/button presses at a given time. This can be fairly useful for many games across many genres, and I’ll give some starting ideas on how the feature might be used effectively below.

Starting Back Button Profiles By Genre

So, especially if you’re using a console alongside your controller back buttons, you’ll want to start generalizing a little bit in order to have layouts that make sense across multiple games. Fortunately, games are already rather conveniently sorted into genres, and those genres tend to have some consistency in control schemes. Let’s talk examples.

Back Buttons in Adventure and Platforming Games

In more adventure and platforming-oriented titles, one of the best ways to use your controller back buttons is to set them to regularly-used functions (like your jump and sprint/dodge buttons), so you can still have access to most of your movement without taking your right thumb away from the analog stick.

A common complaint in games with a lot of 3D movement is the need to choose between character control and camera control with your right thumb. With a setup like this, you can focus on both character and camera movement without making any sacrifices to your basic movement capabilities.

Back Buttons in Hack ‘n Slash or Action RPG Games

For more complex real-time action titles, you may notice a lot of D-Pad usage.

For example, in Devil May Cry 4 and 5, the character Dante notoriously has 4 “Styles” that can be changed between in real-time using the D-Pad, with the active Style completely changing the function of a separate Style button (usually Circle on Playstation or B on Xbox).

Other games, like Kingdom Hearts III, may even go as far as having a full real-time RPG menu that can and sometimes must be navigated in the middle of truly hectic and dangerous real-time combat encounters.

While using the D-Pad for more utility and functionality than movement is pretty cool, the fact is it’s still on the left side of your controller and needs you to either take your thumb away from the analog stick in order to use it. Or, adopt a hand-cramping claw grip. Neither of these are an ideal solution.

So, consider using your back buttons as a D-Pad substitute- especially if you have 4 rather than 2 back buttons. In these types of games where the D-Pad is being used for utility while the analog stick is being used for active movement, being able to access all these functions seamlessly can go a long way.

Back Buttons in Fighting Games

If you play fighting games, your use for back buttons might vary depending on your approach. For example, if you’re playing a six-button fighter like Street Fighter, you may be inclined to use your back buttons for one of those attack buttons rather than other functions. Generally, I expect most fighting gamers to know what exactly they’ll want to do with the extra buttons on their controller.

This makes the majority of motion inputs (QCF, QCB, Uppercut, etc) incredibly consistent to input on either side of the controller and, by extension, either side of the screen. Since I prefer to use the analog stick for movement and find the D-Pad uncomfortable for extended play sessions, this hybrid approach to motion inputs has proven quite beneficial for me in my own tournament play.

More importantly, it’s comfortable, and it feels good and intuitive to me. Of course, I would completely understand why a fighting gamer may choose to use their back buttons for other purposes (especially if they use the D-Pad for movement already), but I took this approach as a way of getting the hyper-clean inputs of a Box-type controller without sacrificing the comfort of a gamepad.

Back Buttons in Shooters

Last but certainly not least, let’s talk about how you can utilize Back Buttons in Shooters!

Shooting games are all about moving and aiming simultaneously, with trigger-based controls allowing for seamless movement and action…most of the time. On console, you still have plenty of face buttons and D-Pad directions that need using, and in either case you’ll be required to take your thumbs away from the sticks in order to do so- adjustments that can be very costly to make in a firefight.

So, controller back buttons in this kind of game are definitely best set to common functions that aren’t on the triggers or shoulder buttons. Jump/Vault buttons, Slide buttons, Reload buttons, even things like Build/Craft Menus or Grenades/Melee all make sense to bind to a back button. I recommend making these choices based on your personal playstyle and pre-existing control scheme.

How To Configure Controller Back Buttons Per Game in Steam

If you’re using a Steam Deck or Steam Controller, your back buttons will be enabled by default. All you need to do is open up your in-game Steam Overlay and click “Controller Configuration” to open up the respective window. On Steam Deck, there’s even a quick access menu for changing the functions of each of the back paddles. 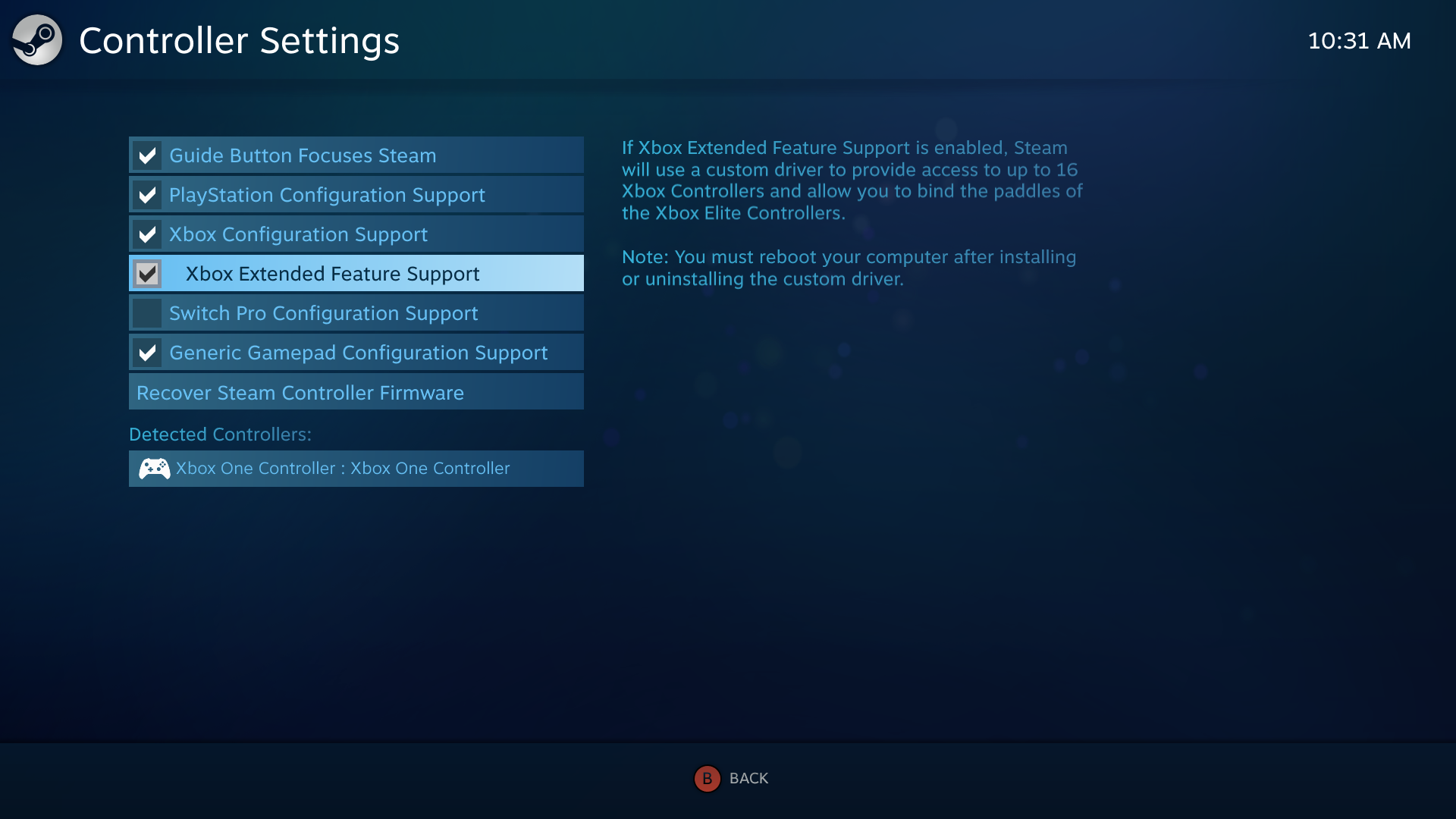 Are controller back buttons legal for competition?

Largely, yes- and it would be kind of screwed up if they weren’t since many of them are built expressly for competition. That being said, there are still some rules you should be mindful of, especially if you’re using third party adapters with official controllers rather than officially-licensed controllers.

For example, the official EVO ruleset dictates that the functions outlined in this article will all be generally fine. What isn’t permitted is using extra buttons as full-on macro keys for executing a sequence or multiple inputs at once. This kind of functionality is limited to third-party adapters/controllers and Steam Input, though, so it shouldn’t be coming up at local tournaments.

What controllers are recommended for this functionality?

My top recommendation for this would have to be the Xbox Elite Series 2 Controller, despite its accursed price point. The presence of four responsive back paddles, plus PC and Steam compatibility, make the Elite Series 2 an absolute joy to use for this purpose. Onboard profile storage- up to 3 custom, as well as deactivating the paddles- also serves to elevate the Elite Series 2 above its competitors in this specific regard.

And that’s it, at least for now! I hope that this article gave you a good starting point when it comes to controllers equipped with back paddles, especially if you own one already and are wanting ideas on how to use it to enhance your existing gaming experiences.

Feel free to leave a comment below with your own ideas or examples of controller back button configurations. And until then or the next post, happy gaming!

What does Anti-Aliasing (AA) do in PC Games?