What are the Best Steam Deck Dock alternatives and why should you be considering them over Valve’s recently-released official Dock? Stick around and I’ll walk you through the best alternatives at various price points and what makes them most compelling compared to the Steam Deck Dock.

Why Are We Talking About Steam Deck Dock Alternatives?

The first reason to consider an alternative to Valve’s Steam Deck Dock is the pricing of the official Docking Station. At $90, that’s a pretty steep price for something that feels integral for the intended docked experience of the Steam Deck.

Fortunately, there are cheaper options available with similar capabilities to the official Steam Deck dock. I’ll be going over a few of those below.

There are a few options that cost more than the Steam Deck Dock that still may be better due to offering superior features. More on what those features are in a moment.

What Are The Key Features To Look For In Steam Deck Dock Alternatives?

The Steam Deck has an intake vent at the lower right-hand corner of the device. Keeping this clear is integral to maintaining good airflow for the device, but many docks (especially repurposed tablet/phone stand docks) do not keep this area properly uncovered, which can cause airflow and thus performance issues. The Steam Deck, like any other PC, will absolutely thermal throttle to prevent damage when overheating, so make sure to get a docking station that takes the Deck’s exhaust into account.

Another important feature to prioritize for a Steam Deck Dock is HDMI 2.0 support to enable a proper 60 Hz output on modern 4K TVs.

HDMI 1.4-based docking stations are still common, and these are limited to 30 Hz when attached to a 4K TV. These docks will work fine with 1080p TVs, but most HD TVs these days are 4K TVs, so having that 4K support makes a big difference.

While you aren’t going to be running games at a native 4K with the Steam Deck, being able to keep 60 Hz at your in-game resolutions will still improve the gaming experience significantly.

Proper fast charge support is important if you’re going to be docking your Steam Deck, because even with the included charger, Steam Deck can take quite a while to hit its full charge. You’ll want headroom for your Steam Deck to continue charging during its docked use, which can be a problem with a lot of cheaper docks that don’t support fast charging.

The charger included with the Steam Deck is 45 Watts, so you’ll want a Steam Deck Dock with fast charge support and a Wattage high enough for both the deck and your peripherals. I would recommend 60W as a baseline and 100W for heavy-duty use with external drives and peripherals.

The key weakness of the Steam Deck and most handheld gaming consoles when it comes to online play is being forced to use Wi-Fi. Wi-Fi is great for watching Netflix on the couch or browsing the Internet in bed, but it isn’t great for a consistent, latency-free gaming experience. You pretty much need Ethernet for the ideal gaming experience, and fortunately, docking the Steam Deck actually makes Ethernet a good option.

Another nice-to-have feature for a Steam Deck Dock is having more than 2 USB ports. Whether you’re connecting multiple input devices, simply have lots of peripherals, or want to attach external storage to the unit, having just 2 USB ports can be pretty confining. By itself, that’s just enough for a Keyboard and Mouse, or two wired controllers.

Finally, particularly high-end Steam Deck Dock Alternatives go the extra mile and allow you to use M.2 drives with the Steam Deck.

I’ll discuss these options in more detail as I get to covering them below, but they do serve the important role of expanding the Steam Deck’s storage without needing to rely on SD cards slower than the SSDs that most Decks ship with.

What Are The Best Steam Deck Dock Alternatives? 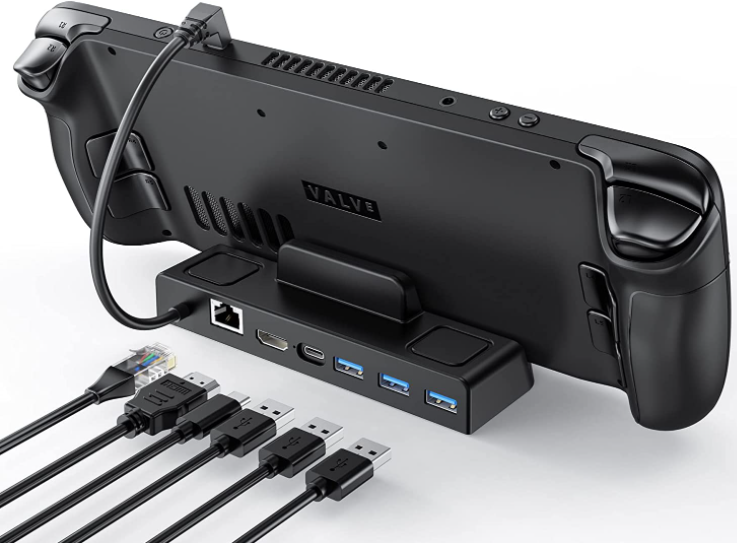 First up, our cheapest Steam Deck Dock Alternative is the Benacap HDMI 2.0 Steam Deck Docking Station. This is pretty much the “bare minimum”, but comes in at just under $40 at the time of writing, which is less than half the price of Valve’s Dock.

Really, there isn’t too much to say about this one. It’s mainly just the cheapest option that I am willing to recommend, as others make way too many compromises or simply don’t work well enough to be recommended. All of my basic requirements are met with this Dock, though, and I imagine the same applies to most consumers who just want to save some money. Consider this one if that sounds like you!

Compared to other cheaper models, the JSAUX Docking Station also has a slightly different design. The Ethernet port being pushed to the side gives more spacing and breathing room to each individual USB and HDMI port left on the back of the unit.

There is a small amount of blockage on the Steam Deck’s intake vent, but most of it is still able to suck in air pretty freely and no one has been reporting any thermal issues as a result yet. I would prefer if it were totally unobstructed like on Valve’s Dock or some cheaper Docks, though. 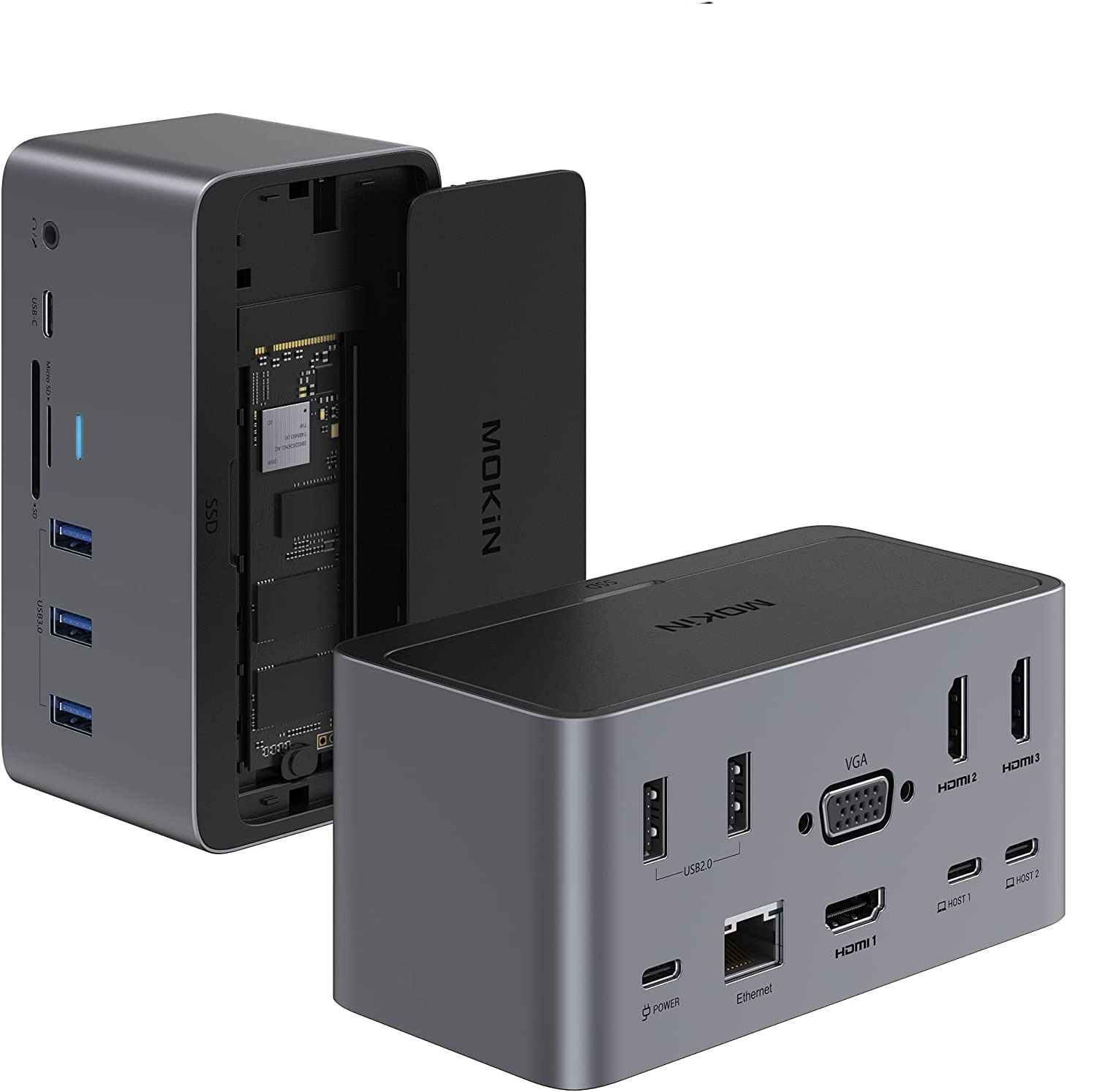 One of my more unconventional picks for this article on Steam Deck Dock alternatives is the MOKiN USB-C Docking Station. Unlike other options included in this list, this one is not tailored specifically for Steam Deck users, so you’ll still need to prop it up on or set it down on something while using this Dock. But that compromise can pay off in some pretty big ways.

First, there are way more USB ports on this Docking Station than any of the other docks. Six including another Type-C port allows for much more peripherals and devices to be attached to your Steam Deck at once. Besides more USB ports, you also have a dedicated card reader for additional SD card expansion or swapping.

The biggest reason I picked this as an alternative is because it supports SATA M.2 drives. By installing a SATA M.2 drive inside of this docking station, you can enjoy full SATA SSD speeds for any games that you install for Docked play, which will be a significant improvement over being forced to fall back on an SD card.

Some features of this Docking Station, like supporting 3 displays at once, aren’t going to be compatible with the Steam Deck since Deck is using Type-C Gen 2 instead of Thunderbolt 3 or 4. However, single-display output at 4K and 60 Hz will work fine, as well as all the other included bells and whistles. Looking for an all-in-one premium Steam Deck Dock alternative? JSAUX strikes back, but this time with a slightly different approach compared to the earlier-listed Dock.

At first blush, this more expensive Dock looks a lot like the cheaper alternative, but there are some key design differences here. For one, the Deck’s intake vent is now almost completely unobstructed, which is an improvement over the cheaper design even if it may not make a big difference. The decision to keep the Ethernet plug on the side and de-clutter ports is still here, though, and a favored decision on my end.

The one singular downgrade compared to the other JSAUX Dock is the reduction of your available USB ports from 3 to 2. I would normally be up in arms about this, but the extra feature that you get in return is too good for me to resist. With this Steam Deck Dock, you can open it up and mount a real NVMe M.2 SSD inside!

That’s a pretty compelling extra feature, but it does come with one important catch: due to the limitations of USB-C, data transfer from that NVMe drive is going to top out at 900 Megabytes per second. This is still better than the maximum speed of a SATA M.2 drive (about ~550 MB/s), but nowhere near the full capabilities of even an NVMe Gen 3 SSD.

It’s still a lot better than falling back on SD cards or external USB HDDs when your Deck’s internal storage is full, but be sure to keep the NVMe speed limit of this Dock in mind before buying.

So, after all that, is there really any reason to still consider Valve’s Steam Deck Dock? It is the official companion, after all, even if it did take most of a year after the Deck to launch. Let’s break down the Valve Steam Deck Dock real quick and talk about what makes it worthwhile. 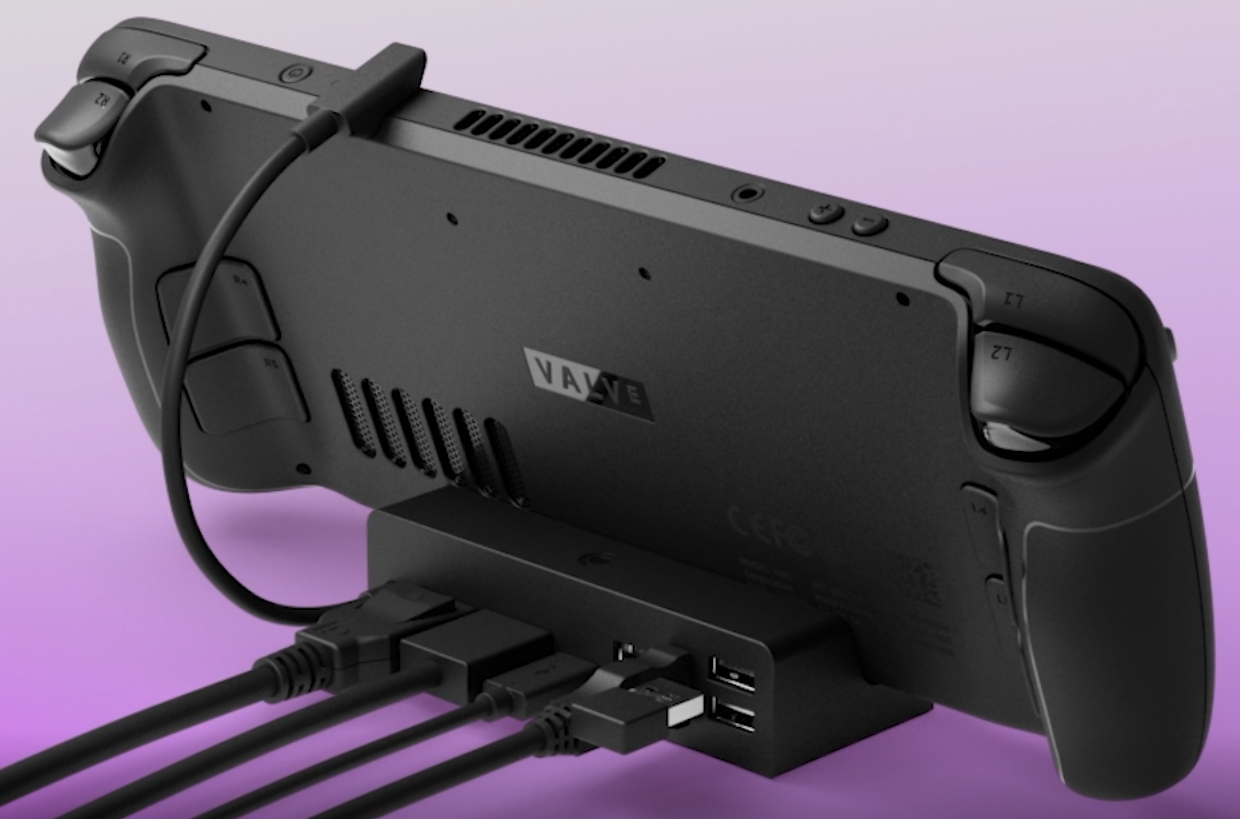 The two major extras offered by the Valve Deck Dock are including another 45W Charger (you’ll need to use your original Steam Deck charger to power the other Docking Stations), and a DisplayPort 1.4 port. I’m not sure if these things justify the increase in price, but they do seem to be the culprits.

Having another 45W charger for your Steam Deck to charge at full speed, especially when docked, is actually pretty nice. Especially if you’re hoping to switch between docked and portable play frequently, lugging the same charger with you all the time can be a bit of a pain.

But that DisplayPort 1.4 port is where things get a little bit more interesting. Through that DisplayPort, you can choose to run your Steam Deck at 1440p 120 Hz instead of 4K 60 Hz, which makes more sense for a lot of gaming PC setups. And while 1440p and 120 Hz are still high goals for a Steam Deck to try and reach, there are still plenty of older titles on Steam where you can very much push that resolution or that framerate on the Deck hardware, though both at once is extraordinarily unlikely. Additionally, the official Dock advertises FreeSync support in a future software update, most likely using this DP 1.4 Port.

Overall, I wouldn’t discount the official Docking Station entirely. It does still have some compelling features of its own. But if you’re just looking for a nice Dock for your Steam Deck that doesn’t break the bank, you definitely have better options, and I hope this article showed them to you.